Last Saturday was the feast of St Mark the evangelist. He is believed to be the first of the gospel writers. It is also believed that both Matthew and Luke, his co-Synoptists, had a copy of his gospel open on their desks as they composed their own gospels. It is then little wonder or surprise that certain words and phrases of Mark will find their way into Matthew’s and Luke’s gospels. The real surprise comes in the unexpected places where we find those words.

There are many examples of this, such as in the build up to the miracle of the loaves. Mark begins to set the scene with Jesus looking at the large crowd which had followed him. As a result Jesus experiences a sense of sorrow or pity for them and wants to offer them his compassion because we are told they were like sheep without a shepherd. Now the word Mark uses for pity or compassion gains a deep and special resonance because of where it is used again by Luke. In the parables of the Good Samaritan and the Prodigal Son, Luke uses this same word to describe both the motivating nature of the action taken by the Samaritan on encountering the assailed traveller, and the way in which the loving Father greets his returning wayward and prodigal son. Luke tells us that both of these individuals were moved to do the things they did by compassion – the Samaritan to bandage and care for the injured man, and the father to hug and receive his homecoming son. Realising this clearly helps us in our understanding of the emotions which Jesus himself must have felt as he looked out on that massive crowd before him. On the one hand, a heartfelt desire to care for and bandage their wounds, and at the same time, a real longing to relieve their sorrow with a loving embrace. Jesus’ response was to feed them with a special food that exemplified all of those feelings in a unique and special way.

As you know Mark’s is the gospel which we are following throughout this liturgical year. However as we are in the season of Easter, the Church puts his gospel to one side and reads instead from the gospel of John.  This weekend is traditionally called Good Shepherd Sunday, and I sense about the gospel we’ve read this weekend that very same emotion in Jesus which comes across from Mark. I am the good shepherd, the one who lays down his life for his sheep. 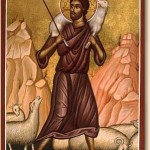 I’m sure that John, in stating these words of Jesus, is telling us essentially the same thing that both Mark and Luke have articulated by their words. Namely that laying down your life equates with those same feelings of compassion and pity combined with the desire to feed and nurture. When we think about our own relationships and families do we not have precisely these same feelings and desires?

Whenever we think about what it is that we really desire above anything else, it must surely be to know that we are loved, and yet this reality for which we so strive can be such a daunting and frightening proposal. Maybe we fear the responsibility which it demands or the commitment which it calls for and as a result we shy away from opening ourselves up to the possibility of failure. But falling in love should never be about fear. In Jesus the Good Shepherd, we encounter the one who lays down his life in love for each one of us. In Jesus there is no uncertainty. In Jesus there is no fear. In Jesus what we discover is a compassion which is fed through a desire to bandage our wounds and a longing to welcome us home – a calling that both shepherds and feeds us.

This entry was posted in Commentaries, Cycle B - The Year of Mark. Bookmark the permalink.